Kalarivathukkal Temple is the family shrine of Chirakkal royal family. The principal deity is Bhadrakali in her fierce avatar. She is the patron deity of Kalarippayattu which is Kerala’s enduring martial art form. A kalari is essentially an area for teaching Kalarippayattu. The word kalari comes from Malayalam. Kalarivathukkal means at the Kalari door.

The central idol is made of Kadu Sharkara. For rites and purifications, priests use an archana bimbham of Devi.  To east of the main temple building, there is a shrine for Saraswathi and a Naga Sthanam.

Kalarivathukkal temple is in Kerala architectural style, with generous use of wood, laterite stones and red clay tiles. Visitors climb up a short flight of steps and pass through the padippura. The mukha mandapam has wooden doors covered in gold. In front of the doors is the ancient balikkal. Above the balikkal you see intricate wooden carvings on the roof. The sreekovil is in front of namaskara mandapam. If the crowds are less, you can have darshan without stress.

A cloistered prakaram surrounds the sreekovil. This prakaram also houses subsidiary shrines. A kitchen is located in the south eastern corner of the prakaram. The temple is in the middle of a large kavu which is a rich sanctuary of biodiversity. Nestled among the woods are the Naga Sthanam and Saraswathi shrine. It is forbidden to walk on the northern side of the temple. 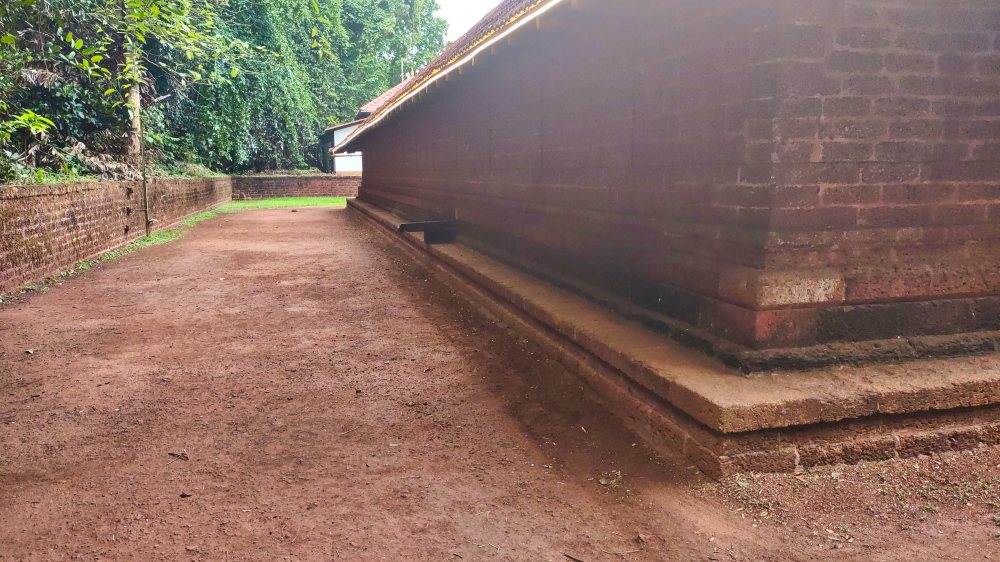 The temple celebrates two major festivals. One is the Pooram Mahotsavam and the other is Thirumudi Utsavam. Pooram Mahotsavam occurs in the Malayalam month of Meenam (March-April). Staging of Kalaripayattu, Thayambaka and Poorakkali mark the celebrations.

Thirumudi Utsavam happens in the Malayalam month of Edavam (May-June). This signals the conclusion of Theyyam season in north Malabar.  Thirumudi Utsavam has seven Theyyams on  show.  The theyyams wear big headgears (mudi). The headgear of Kalarivathukkal Bhagavathy is the tallest among Theyyams in Kannur.

The temple has several poojas dedicated to Goddess Bhagawathi. Some of them are:

Bhaktas can book pooja online at the temple website.

Kannur Railway station is a drive of 7.3 km (17 min) via Puthiyatheru, Podikundu and Chettipeedika. Nearest airport is Kannur International Airport, 31.1 km (50 min). Kannur bus stand is 8.8 km from the temple via NH66 and well connected to major cities in Kerala and elsewhere.

Men: Dhoti or mundu is mandatory. Shirt and banyan should be left behind.
Women: Saree and pavada go through. Salvar  and modern dresses are frowned upon.

2 thoughts on “Kalarivathukkal Temple near Kannur in Kerala”