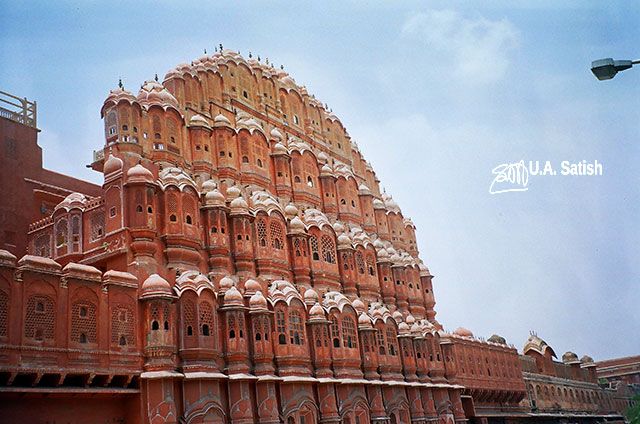 Jaipur is the capital of the state of Rajasthan. It is the gateway to other tourist destinations in Rajasthan such as Jodhpur, Jaisalmer, Ajmer and Udaipur.  The Golden Triangle is formed by Jaipur, Agra and New Delhi.  Maharaja Jai Singh II built the city in 1726. It is 260 km from New Delhi.

Hawa Mahal is one of the best-known tourist spots in the city. It has a unique facade with 953 windows or Jharokhas with intricate decorations. The royal ladies used to look down on the street below without they themselves being seen. A five-storied structure, it is a prime example of  Rajputana architecture. The pink sandstone structure is Jaipur’s iconic landmark.

Jaipur is known as the Pink City. This is because each building within the walled historic centre is painted a terracotta pink colour. Maharaja Sawai Ram Singh II had the city painted pink to welcome the Prince of Wales in 1876. The Maharaja then passed a law in 1877 making it illegal for buildings to be of any other colour than Jaipur Pink. The law is i force even today.

City Palace is within the walled city. It was built by Maharaja Jai Singh II, the founder of Jaipur. It is still home to the descendants of the royal family who occupy a private section of the palace. The palace contains beautiful paintings on the ceiling. Within the palace complex is Maharaja Sawai Man Singh II Museum.

Moti Doongri is a small hill which has a palace on top. Built along the lines of a Scottish castle, it was the royal home of Maharaja Sawai Man Singh II. His third Maharani consort, Maharani Gayatri Devi used to reside in the palace. She passed away on 29 July 2009 in Jaipur at the age of 90.

Memorial for Martyred Soldiers in Jaipur

Amar Jawan Jyoti is a memorial to the martyred soldiers of Rajasthan. Eternal flames burn at four corners of the structure. It is brillianly illuminated at night.

Located at the foothills of Nahargarh Hills, Kanak Vrindavan is a popular picnic spot. The beautifully landscaped gardens include a temple, marble columns and fountains.

The exquisitely designed Prince Albert Hall is located in Ram Niwas Garden. Sir Swinton Jacob was the architect. The Prince of Wales laid the foundation stone of the building in 1876. The museum displays a wide range of metal objects, wood crafts, carpets, sculptures, arms, weapons, ivory carvings and precious stones. It also showcases an impressive collection of miniatures from Bundi, Kota, Kishangarh, Udaipur and Jaipur schools of art.

This is the largest of the five astronomical observatories which Maharaja Sawai Jai Singh II had built. It contains sixteen geometric devices which measure time, track celestial bodies and observe the orbits of the planets around the sun. It is  now a UNESCO World Heritage Site.

From Jaipur, Amber Fort is at a distance of 11 km. It is on top of a hill and a major tourist attraction. Built of sandstone and marble, the fort overlooks Maota Lake. The fort is a UNESCO World Heritage Site.

Jaipur is on National Highway 8 which connects Mumbai and New Delhi. Trains link Jaipur with all major cities in India. Phase I  of Jaipur Metro commenced operations in June 2015. The Metro line has nine stations. Jaipur International Airport is 11 km from the city centre, in Sanganer.