Udupi Sri Krishna Temple  is a major Hindu temple in India. It has its origin in the thirteenth century. The main deity is Lord Balakrishna. The location is in the temple town of Udupi.

The idol of Lord Krishna faces west. This is contrary to the normal practice where the deity looks towards east.  In this context, all the idols in the Udupi Ashta Mathas are west-facing. 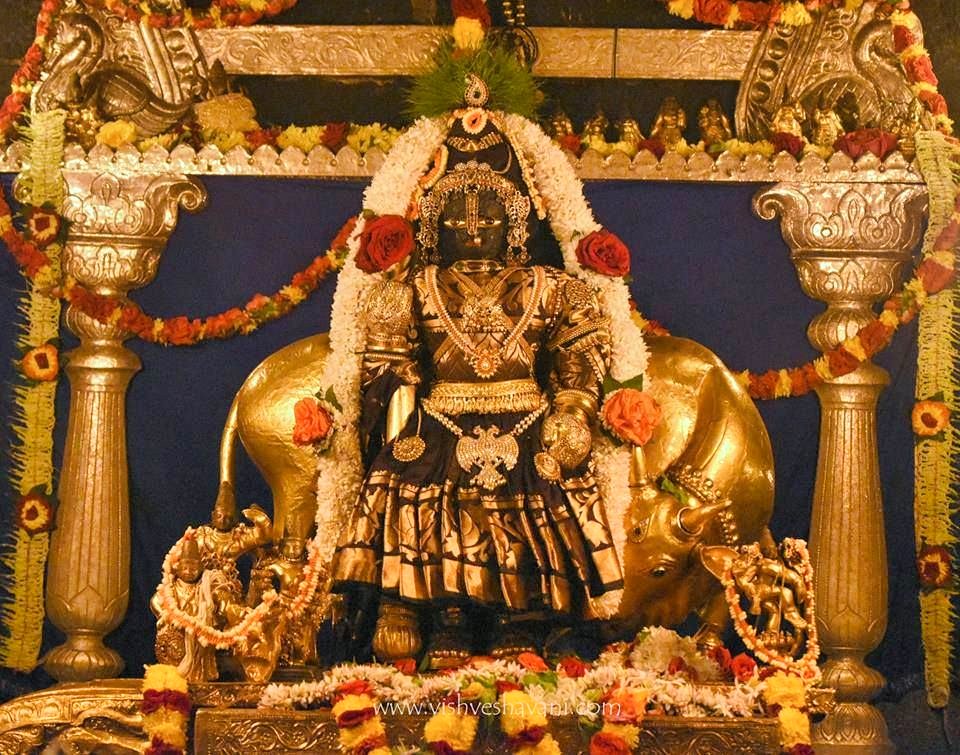 As per folklore, Kanaka Dasa was a great devotee of Lord Sri Krishna. But he was from a lower caste and hence not allowed entry into the temple. Still he prayed with intense devotion. Sri Krishna was pleased and created a small window in the back wall of the temple. He then turned around to the west to face Kanaka Dasa. This window is known as Kanakana Kindi. Now there is a tower, Kanaka Gopura, over Kanakana Kindi.  Pilgrims can catch a glimpse of Sri Krishna through the window before entering the temple.

Sri Madhavacharya, Vaishnavite saint, established the temple.  He was the originator of the Dvaiti school of Vedanta. Devotees believe that he found the idol of Sri Krishna inside a large ball of sandalwood.

Udupi gets its name from the Sanskrit word Udupa which means moon. The name is also associated with the commencement of the ancient Chandramoulishwara temple which is located inside the Sri Krishna Mutt.

Chandramoulishwara is a synonym for Lord Siva. It is a combination of three words. Chandra is moon, mouli means hair and ishwara is God. Lord Shiva has a crescent moon on his hair.

Architecture of the temple is in traditional form with red tiles on the sloping roof. Other small shrines in the temple are dedicated to Ganesha, Hanuman, Garuda and others. Next to the temple is Madhava Sarovar or  pond.

Chenna Keshava shrine is at the rear of the sanctum. The Lord holds shanku, chakra, gadha and lotus in his hands. Behind this is the eastern entrance of the sanctum which is open only on Vijayadashami day. Devotees are able to watch pooja ceremonies live on large tv screens.

Udupi is 61 km (1 h 21 m) via NH 66 from Mangalore. Trains link Udupi to all major cities in India. Almost all fast train stop here. Udupi railway station is 3.2 km from the temple which is in the heart of the town. The bus station is close by.