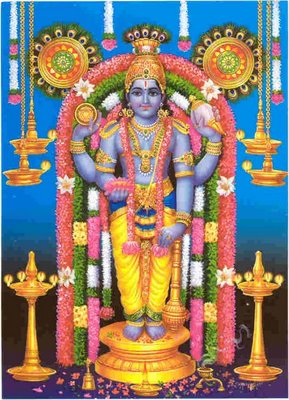 Guruvayur Sri Krishna Temple is one of the best-loved temples in Kerala. The presiding deity is Sri Krishna, He is the eighth incarnation of Lord Vishnu and a supreme god in his own right. The main idol is a four-armed Krishna in a standing position. He carries the conch Panchajanya, the discus Sudarshana Chakra, the mace Kaumodaki and a lotus. This image represents the majestic form of Vishnu. At the time of Krishna’s birth, he had revealed the form to his parents Vasudeva and Devaki.

Mentions about the Guruvayur temple in history is found in the Tamil literary works of 14th century and later in 16th century. Melpathur’s composition Narayaniyam made this temple very famous. The central shrine was built in 1638 AD and became a famed pilgrim spot of the subcontinent. The Dutch plundered the temple in 1716 and set fire to it and it was rebuilt.

In 1766, Hyder Ali of captured Calicut and then Guruvayur. To stop the demolition of the Sree Krishna temple at Guruvayur, Mysore demanded 10,000 fanams.  The authorities paid it. At the request of the Governor of Malabar, Hyder Ali granted a devadaya (free gift) and the temple was saved.

In 1789, Tipu Sultan invaded Guruvayur. Temple authorities hid the idol underground and the Utsava vigraha was taken to Ambalappuzha Sri Krishna Temple by Mallisseri Namboodiri and Kakkad Othikkan. Tippu destroyed the smaller shrines and set fire to the temple. Fortunately timely rain saved it. After this, there were several renovations. Following a big fire in 1970, the temple administration carried out restoration work.

Seeveli is a circumambulatory procession of caparisoned elephants at Guruvayur Temple. One of them carries the idol of Lord Krishna on his back. Seeveli is performed thrice daily: 7:00 am, 5:30 pm and 8:30 pm.

Only Hindus are allowed inside the temple. Devotees have to follow a strict dress code. Women are expected to wear saree or salwar kameez. Young girls are permitted to use long skirts and blouses. Men have to wear mundu. Boys can wear shorts.

Devotees have to go through security checks at the entry point. They are scanned for dangerous or suspicious objects. Mobile phones, cameras and other electronic gadgets are prohibited. They can be deposited in lockers at a nominal cost. Photography and videography are strictly forbidden.

Devotees throng the temple on weekends and holidays. We reached the temple on a Sunday afternoon and had to stand in barricaded queues for two hours to earn an entry. Even at 3:00 am for Nirmalyam, there were long queues.

Nobody returns from Guruvayur without making an offering,  small or big.  Devotees offer almost anything, from flowers to gold. The main offerings are:

This is one of the well-known offerings at Guruvayur, the bookings for which are reportedly full for the next ten years. Udayasthamaya implies worship from sunrise to sunset. It includes fifteen special poojas apart from all the routine poojas. Udayasthamana pooja begins after the morning Seeveli. Devotees partake in a special feast. Then there is Vilakku (illumination) in the evening. The evening Siveli has five rounds of circumambulatory processions instead of the usual three.

Arrangements are in place for feeding thousands of devotees at 10.00 am everyday. One can make an offering of any amount for the free feeding.

This is the first rice-giving ceremony of a child before the Lord Guruvayurappan. All the items including cooked rice, payasam,  plantain etc. are placed on a banana leaf and the children are fed each of the items.

Also called angapradakshina, the devotee circumambulates the temple. He or she rolls along the pradakshina path with the eyes closed and chanting the Lord’s name.

Melpathur auditorium adjoins Guruvayur Temple. It is named after the great saint poet Melpathur Narayana Bhattathiri. He composed  the devotional classic Narayaneeyam. The auditorium is used for cultural programmes from 6:00 am till midnight. Entry is free. The video shows an artist performing Mohini Attam at the auditorium.

Guruvayur is 27 km (45 min) from Thrissur. Alternatively, visitors can travel to Guruvayur from Kuttippuram. It is a distance of 39 km (60 min). The bus stand at Kuttippuram is accessible by a short walk from the railway station.

Guruvayur has rail connectivity. But the frequency of trains is somewhat limited. There are trains to and from Trivandrum, Chennai Egmore, Ernakulam, Thrissur and Punalur. The nearest airport is Kochi International Airport (80 km).