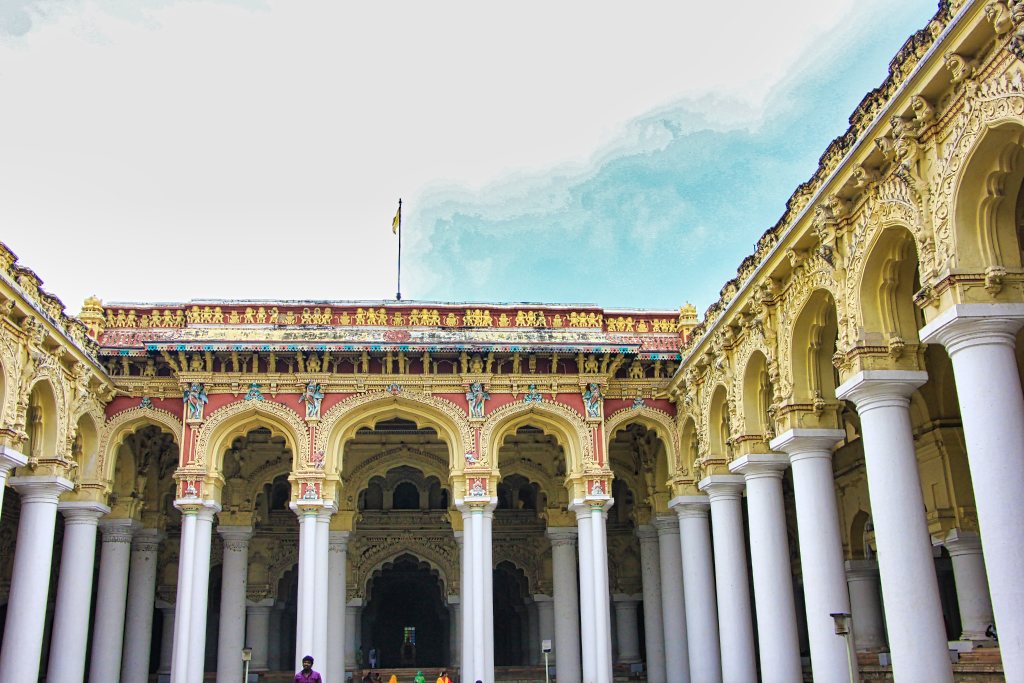 After Thirumalai Nayakkar passed away, his grandson tore down large parts of the palace. He carried the precious jewels and wood carvings to Tiruchirapalli in an effort to build his own palace. Lord Napier, Governor of Madras, later presided over restoration work between 1866 to 72. The British used the place as a garrison.

We enter through massive renovated gates of the palace. The sky above the courtyard was blue with white clouds. In front of us, we see a vast courtyard. On three sides are huge pillars which line the corridors.  The pillars soar up to a height of 13 metres. They support big decorated arches. Beautiful paintings cover the ceiling. Protruding from the walls are animal figures and gargoyles.

We climb up the stairs in front to enter Swarga Vilasam which is a colossal pavillion. A large throne occupies the centre. Above is a mighty dome that has beautiful paintings. Light streams in through windows encircling the dome.

Another notable feature of the palace is Narthana Shala or Dancing Hall. This is where dancers, singers and musicians entertained the king and his retinue. This is a big hall with an arched ceiling.  Pillars support the arches. Windows line the sides.

The Palace in Present Day

After Independence, the palace was handed over to Archaeological Department of Tamil Nadu government. Three fourths of the original palace had been destroyed. However the remaining parts are regaining their past glory as a result of the restoration work.

The palace puts up a light and sound show in the evenings. Th narration is in English as well as Tamil. I could not see the show due to shortage of time.