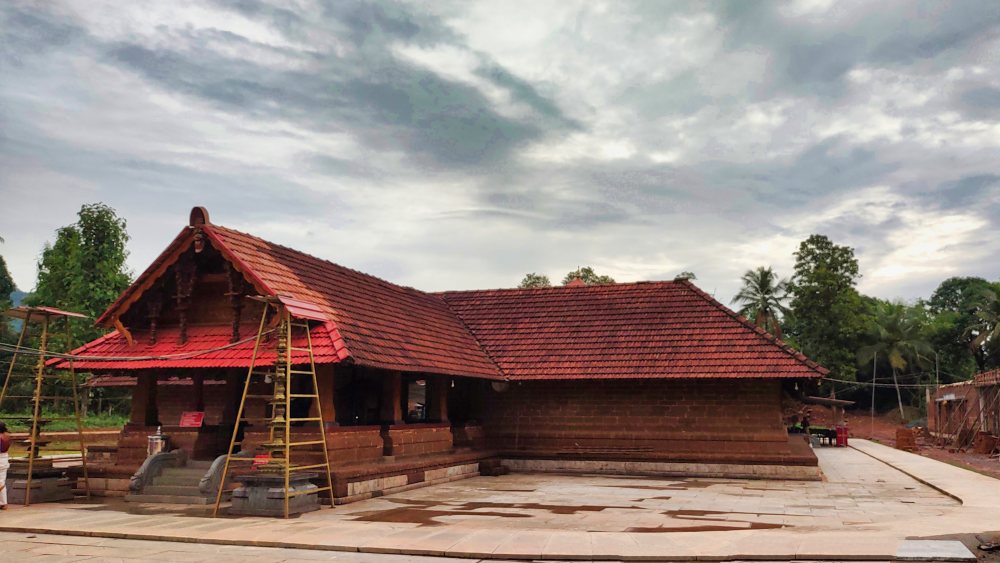 Mridanga Saileswari Temple is dedicated to Durga Devi. The principal deity is in the form of a four-armed Durga, with two hands pointing upwards. The hands hold a conch and chakra. The front right hand blesses her devotees while the front left hand is on her waist.

Mridanga Saileswari is worshipped as Goddess Saraswathi who is the patron of music, arts and knowledge. Devotees worship the Devi, in the form of Porkali, in a shrine outside the main temple, There are several temples in Malabar that worship Porkali Goddess. Most of them are associated with Kalaries, the learning centres for the much acclaimed  martial art form of Kalaripayattu.

The temple follows the distinctive Kerala style of architecture. The main construction materials are laterite stones, wood and red tiles.  The skeletal framework of the temple is wooden while the base and structure are of granite and laterite. The roof slopes at several levels, to protect the framework from the intense monsoon rains. A Saraswati Mandapam has come up by the side of main temple for the performing arts.

The temple pond is vast and trees grow profusely along its boundaries. The banks are protected by granite and laterite walls. Steps go down to the water on all four sides. As per legend, Kottayam Thampuran was not able to envision the attire and form for a female character in Kathakali. The belief is that the goddess herself appeared before Thampuran at the temple pond and guided him.

Mridanga Shaileshwari was the family deity of Kottayam royal family. Pazhassi Raja was a member of the family and renowned for his battles with the British in the Cotiote War. The life and times of Pazhassi Raja are closely connected with this temple. After his death on 30 November 1805 in a gun-fight at Mavilanthodu near Mananthawady, the temple gradually fell into disrepair. Later in 2017, the revelations of Dr. Alexander Jacob made the temple well-known in Kerala.

Alexander Jacob was a former Director General of Police in Kerala. He stated on a TV channel that thieves tried to steal the panchaloha idol from the Sreekovil on three occasions. But they did not get any success. Every time the thieves themselves brought the idol back to the temple because of extraordinary celestial interventions.

Mridanga Saileswari Temple is on top of Muzhakkunnu hill which has the shape of a Mridangam. Popular belief is that the hill resonated with the musical notes that Goddess Saraswathi created. Locals then started calling the hill as Muzhakkunnu or hill that echoes.

The temple celebrates Navaratri with much enthusiasm. The last three days of Navaratri, Ashtami, Navami and Vijayadashami,  get the prime focus for worship of Saraswathy.

Pooram Mahotsavam falls on the Pooram star in the Malayalam month of Meenam (March – April). Performances of Thayambaka and Poorakkali, traditional and martial art forms, mark the festival .

Neyvilakku (Ghee lamp) is the foremost offering here. Devotees can offer pooja online. Click on link to visit the site.

Men can wear mundu, veshti and pants. Women may choose to put on saree, skirt or salwar kameez. Boys can go for shorts.

Thalassery is the nearest railway station and is 35.7km (1 hr) from the temple. Kannur International Airport is 21.1km (36m) and the nearest airport. Kannur to Mridanga Saileswari Temple by road is 44.6 km (1 hr 17 min).