Zero Point Sikkim is close to the international border with China in North Sikkim. The road from Lachung ends here. Civilians cannot venture beyond. Visitors to the border area need to procure a permit from the military authorities in Gangtok. With a year-round mild temperate climate within the higher peaks of the Himalayas, Gangtok is the hub of Sikkim tourism.

Zero Point is 51 km from Lachung. During winter the town is usually covered in snow. Lachung is also the base camp for Rhododendron Valley Trek which starts from Yumthang Valley and ends at Lachen Valley. Although the route is scenic, the mountain roads are not in good state. So the journey may take about three hours. It will be advisable to start early at 6:30 am and drive straight to Zero Point. Before noon, you can start the return journey. Yumthang Valley can be visited on the return leg.

As you approach Zero Point, you will come across an army camp at 13,700 feet. The place has been interestingly named Jalebi Point. We had garam chai and snacks at the army canteen.

Zero Point is bordered by mountains. On the other side of the mountains lies People’s Republic of China (PRC). China spans five geographical time zones and borders 14 countries. The mountains are covered with snow during most of the year. We had gone there in June and plenty of the snow had melted.

Being a sensitive border area, the army maintains a significant presence here. They guard the borders throughout the year, in good weather and bad. Convoys of big army trucks passed us from time to time.

The best time to visit the area will be in the months of April and May. The lower stretches of the mountains will be covered with beautiful Rhododendron flowers. It is the national flower of Nepal, the state flower of Nagaland and the state tree of Sikkim and Uttarakhand. Most species have brightly colored flowers which bloom from late winter through to early summer. During winter, it can be bitterly cold. Snowfall may blanket the roads. Landslides are not uncommon. 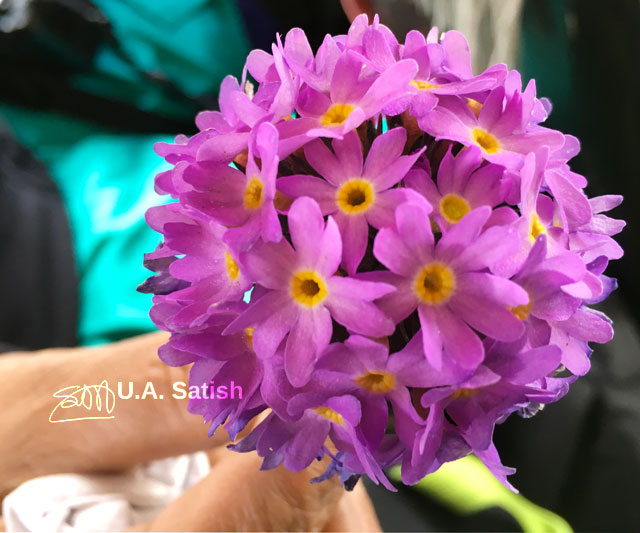 Zero Point is at an altitude of 15,300 feet. Oxygen levels are low at this elevation. Heavy physical activities may result in breathing problems and dizziness.  Altitude sickness typically occurs only above 2,500 metres (8,000 ft), though some are affected at lower altitudes. Risk factors include a prior episode of altitude sickness, a high degree of activity and a fast increase in elevation. Be sure to carry your medicines since you will not come by medical shops or hospitals in the sector. There are no ATMs in Zero Point and you should carry enough cash.

There are road-side shacks at Zero Point which serve noodles, tea, coffee and even alcoholic drinks. You can hire jackets, gloves and boots if needed. The shops pack up at around 12:30 pm as the weather may turn bad in the afternoons.

The parking lot at Zero Point Sikkim accommodates some 150 cars and jeeps. Diesel fumes added to the discomfort in the thin air. The traffic was chaotic. Extricating our vehicle from the place was time consuming. Garbage disposal seemed to be in a muddle.

There is an old helipad at Zero Point. Security forces may have used the helipad.