Rumtek Monastery or Dharma Chakra Centre is the largest monastery in Sikkim and is the home to a community of Budhist monks. It is on top of a beautiful green hill which faces the city of Gangtok. Flowing streams surround it. There are mountains at the back and a snow range in front. A river flows below.

Rumtek Monastery is the seat of Karmapa Lama, the third highest monk in Tibetan Buddhism. It is one of the foremost seats of the Kagyu (Black Hat) sect of Tibetan Buddhism outside of Tibet and is also known as Dharmachakra Centre. The Karma Kagyu are sometimes called the Black Hat lamas, in reference to the Black Crown worn by the Karmapa. His regional monastic seats are Karma Triyana Dharmachakra in New York and Dhagpo Kagyu Ling in Dordogne, France.

Rumtek Monastery is 24 km from Gangtok. It is at a height of 1,500 metres (4,900 ft). Cars can go up to the main gate. After that, visitors have to walk up a steep road for about 10 minutes. Cars have permission to ferry the old and infirm. Guests can hire taxis from Gangtok.

The monastery is open from 6 am to 6 pm. Entry fee is Rs 10. Travellers can stop by the cafeteria near the main gate.

The monastery conforms to ancient Tibetan traditions. The builders have used modern construction materials. It has several similarities with the monastery in Tsurphu, Tibet. A Dharma Wheel sits on top of the main gate with a male and female deer represented on either side. The central building has a large prayer hall. Quarters for the monks and a large courtyard surround the four-storey monastery. It s on this courtyard that the celebrated lama dance takes place.

At the centre of the courtyard is a pillar. Inscriptions in Tibetan on the pillar contain the complete history of Rumtek Monastery. The monastery is spread over 74 acres. 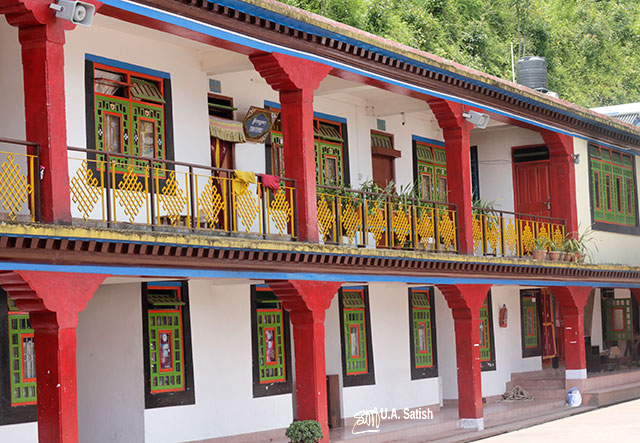 The twelfth Karmapa initially built Rumtek monastery in the mid 1700s. But when the sixteenth Karmapa arrived in Sikkim in 1959, he found the monastery in ruins. With liberal help from the Sikkim royal family, he rebuilt the place in four years.

The Golden Stupa and Prayer Hall

Behind Rumtek Monastery is a pathway that leads to the beautiful Golden Stupa. The stupa is inside a grand temple and contains the holy relics of the sixteenth Gyalwa Karmapa. The Golden Stupa, or Labab Choeten, is at the centre of the temple. The Choeten or urn has a gold coating and adornment of jewels, mostly ancient turquoise and corals. The Golden Stupa s 13 feet tall and contains statues of all the sixteen Gyalwa Karmapas.

At rear of the temple is the main image of Vajradhara or Dorje Chang. It is 5 feet tall. Vajradhara is the primordial Buddha, depicted in dark blue colour. He represents the essence of Buddha’s realisation of enlightenment.

Photography is allowed outside the buildings, but is forbidden inside. Washrooms have been made available for the convenience of visitors.

One Week in Sikkim