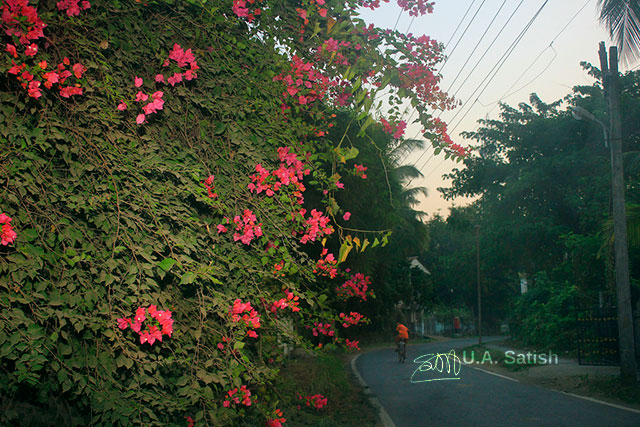 Vasai-Virar is a fast-developing area in Palghar district of Maharashtra. Vasai-Virar City has a population of 1.21 million. Mumbai International Airport is 49 km by road, via NH 8. Vasai Road railway station is connected by frequent local trains to South Mumbai.

Mumbai Metropolitan Regional Development Authority (MMRDA) has approved plans for construction of a road bridge over Vasai Creek to link Vasai and Mumbai. This will significantly cut down on the travel time.

Seven kilometres from the railway station is Vasai Gaon. The Portuguese had built Bassein Fort here.  The Portuguese buildings inside the fort are in ruins although there are enough standing walls to give a good idea of the floor plans of these structures. Archaeological Survey of India has started restoration work on the fort.

In the second half of sixteenth century, the Portuguese encircled the town of Bassein within a fortress wall which had ten bastions. In the eighteenth century, the town was overshadowed by neighbouring Bombay which had been handed over to the British in 1661. Soon afterwards Bombay became the headquarters of the British East India Company in India. With the emergence of Bombay as a major port for export of cotton to England, the balance of power shifted from Bassein to Bombay.

The Marathas captured Kalyan in 1720. In 1737 they seized Thane and Salsette Island from the Portuguese. The other Portuguese settlements in the Northern Province were conquered in 1738-39. In February 1739, the Maratha General Chimaji Appa laid siege to Bassen Fort which surrendered on 16 May 1739.

Due to the spurt in construction activities in Vasai, many workers from different parts of India have migrated to Vasai-Virar in search of work. The photo shows a group of workers engaged in laying a new power line.

Due to the salinity in the soil, some parts of Vasai have sparse vegetation. Trees shed their leaves in the dry months and the shoots come back with the onset of rains.

The architects have built Sree Ayyappa Temple in the style of Kerala temple architecture. The roof is covered with red clay tiles. There is a tall kodimaram (flagstaff) in front of the temple. On festival days, the outside walls of the temple are lit up using many small oil lamps. The temple was consecrated in 1995.

A big beach, Suruchi gets its name from the suru (Casuarina) trees which line the beach. The beach is 7.6 km from Vasai Road railway station. Buses go up to Parnaka in Vasai Gaon. From there, it is another 1.6 km to the beach. It is a walk of about 20 minutes. The road from Parnaka to the beach is in poor condition.

There are many small villages around Vasai where the population goes in for agricultural activities. Vasai is famous for different types of bananas such as rajeli, tambeli, mutheli and velchi. Dried banana is a speciality of Vasai. Other fruits that grow here are mangoes, papayas, guavas, watermelon and coconuts.

Enticed by the wetlands and greenery of Vasai during monsoon, many migratory birds are flocking to the region. Salt pans along the railway tracks between Naigaon and Vasai present a pleasant scene with flamingos, storks, openbills and white ibis feeding in the wetlands.

Workers from villages of Gujarat, Maharashtra and Bihar operate the salt pans. The workers start their work early in morning to escape the intense heat from the sun. Salt production stops for four months in a year during the monsoon season.

The Kolis of Vasai belong to the Marathi ethnic group. They mostly engage in fishing activities. There is a large Koli fishing village in Vasai Gaon, close to  Vasai Fort.

In the nineteenth century, many Kolis were employed in the textile mills of Bombay which was under British administration. The disparaging English word coolie evolved from the name of this community.

Temples of different sects exist in Vasai. The photo shows young girls dressed up for a procession during the Navaratri festival.

Vasai has Vasai Creek to the south and Sahyadri Ranges to the east. Vaitarna River makes up the northern boundary while Arabian Sea is in the west. Many parts of Vasai  fall under the coastal regulation zone and are out of bounds for development. The area gets 2,000 to 2,500 mm of rainfall annually. Eighty percent pf the rainfall occurs between June and October. Humidity ranges between 61 and 86%.