Edathua Palli is an imposing church on the banks of River Pamba in Kerala. St George is the patron saint of the church. It is also known as St. George Forane Church and an immense religious centre of Syro Malabar Catholic Church.

Believers originally built a small church at Edathua in the name of Archangel Michael in 1810. Later they constructed the present structure in 1829. It came to be known as Saint George’s church after the parishioners bought the idol of Saint George from Edappally in Ernakulam. Legend has it that even though the people of Edathua bought the idol, they had to take forceful possession of it since the people of Edappally were reluctant to part with it. Eventually the visitors from Edathua had to escape with the idol in snake boats.

Locally Edathua church goes by the name of Church of Geevarghese. In Kerala, Geevarghese is the name for St George. How this saint came to be so popular as Geevarghese among the Syrian Christians is a puzzle. Varghese is a common name among Nasranee men. Interestingly the sculpture of Geevarghese looks different from the idols of St George found elsewhere in the world.

St. George is the patron saint of England and Georgia. Tradition holds that he was a Roman soldier and was tortured and decapitated under Roman Emperor Diocletian’s persecution of Christians in 303. His remains were taken to Lydda (now Lod, Israel), the homeland of his mother. Later they were shifted to the church that was built in his name there. Various relics reportedly are housed in both Western and Eastern churches worldwide.

Silene in Libya was tormented by a vicious dragon living in a nearby pond, poisoning the countryside. Saint George killed the dragon and saved the king’s daughter from the dragon.

The architecture resembles that of ancient churches in Europe, with refined arches and large pillars. The main structure is of two stories with a sloping red roof. There is a long passage in front which has arched entrances on three sides. A picture of Jesus Christ is on top of the front entrance. The bell tower is at the back.

The interior of the church is grand with a high ceiling. The three storied altar consists of four pillars and three divisions with cells for placing statues. The sculpture of St. George is on the southern altar, outside the nave. Small paintings adorn the side walls. I observed a balcony at the rear. An auditorium has come up to left of the church. A dark tall flag pole stands between the church and River Pamba outside.

Edathua Perunnal is the local name for the annual feast of St George Forane Church. The feast draws a large number of believers from across the state and outside. The event begins on 27 April with special prayers and the celebrations conclude on 7 May. Devotees believe that prayers at this church help cure mental disorders and other ailments. Fireworks, processions and special prayers mark the festival days. During the feast, followers carry the statue of St. George and place it on the dais in centre of the basilica.

Priests perform all prayers and related ceremonies during the feast. Devotees from Tamil Nadu, Andhra and Telengana also travel to Kerala for the festival. Big crowds witness the festivities. There are cultural performances every evening. At night, the church gets colourful illuminations. Fireworks light up the sky. During the ten-day feast, many devotees stay and cook food in the church premises and take part in ritual immersions in the waters of River Pamba.

Ambalapuzha Sree Kishhna Temple is 13 km (21 min) from Edathua, via Karumadi and Thakazhi. Mannarasala Nagaraja Temple, believed to be more than 3,000 years old, is 11.9 km (22 min) to the south. The ancient St. Marys Church, Niranam, originally established by Thomas the Apostle, is a drive of 9 km to the south-east.

Edathua lies below sea level in the Kuttanad region. High mud embankments separate agricultural land in this region from rivers. Farmers and agricultural workers build their houses on reclaimed land by expanding upon these embankments around the paddy fields known as padam. The embankments are also often planted with coconut trees, a major commercial crop. Kuttanad attracts numerous foreign travellers. 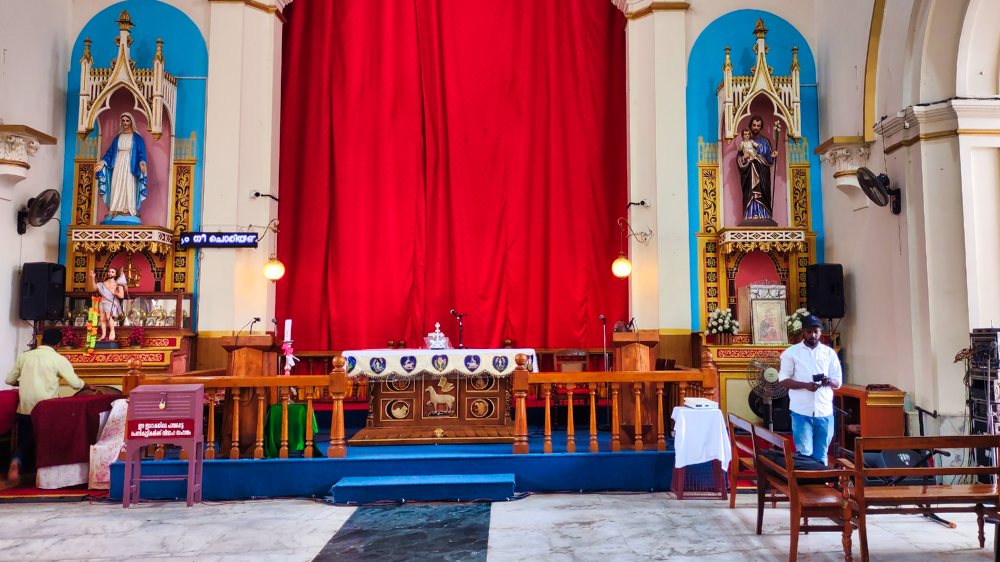