I have put together a selection of my pictures of bridges. They are from different parts of the world. Some of the bridges are famous while others are historic or have architectural beauty.

Blauwbrug (Blue Bridge) is a historic bridge across the Amstel River. It connects the Rembrandtplein with the Waterlooplein in central Amsterdam. The original seventeenth-century wooden bridge was painted blue. It was replaced by the new bridge in 1884. Its architecture is similar to the bridges across the River Seine in Paris.

Magere Bridge is probably the most famous bridge in Amsterdam. It is called Skinny Bridge because it was so narrow that two persons could hardly pass each other. Only cyclists use it. The bridge is illuminated at night.  Some scenes of the James Bond (Sean Connery) movie Diamonds Are Forever were filmed on the bridge.

There are many beautiful bridges in Paris spanning River Seine. When I clicked the photo, the river was muddy because it had rained the previous night.

Pont des Arts is one of Paris’ main bridges. It had thousands of locks symbolically fastened to it by love-struck Parisians. The authorities have recently removed the locks as the combined weight of the locks was getting too high.

Chapel Bridge or Kapellbrücke is  the most photographed site in Switzerland. It is a beautiful wooden pedestrian bridge over River Reuss in Lucerne and has paintings that decorate the rafters. The bridge dates back to 1333 and it has a unique appearance.

Ponte Vechhio or Old Bridge is a romantic spot in Florence. It has great views across River Arno. On both sides of the bridge are jewellery shops which are popular with visitors. At night, the bridge is a lovely place for a stroll. On November 4, 1966, the Arno overflowed its embankments and invaded the entire historical city center of Florence. The flood waters caused many deaths and serious damage to the city’s monumental artistic heritage.

Ponte Sant’Angelo or Bridge of Angels in Rome  has ten beautiful angel sculptures. The famous Italian sculptor Gian Lorenzo Bernini designed it. Each of the angels symbolises a part from the story of Jesus Christ’s suffering and death by crucifixion. Statues of the saints Peter and Paul guard the entrance to the  bridge. Roman Emperor Hadrian built it across River Tiber  in 134 AD.

Lachung is a hill station in Sikkim at an elevation of 9,600 feet (2,900 metres). It is near the border with Tibet. Indian Army has a forward base in the town. Indian Army built Lachung Bridge in 1999.

River Teesta originates in the Himalayas and flows through the Indian states of Sikkim and West Bengal. It merges with the mighty Brahmaputra in Bangladesh. Teesta Bridge links the hill stations of Darjeeling and Kalimpong. 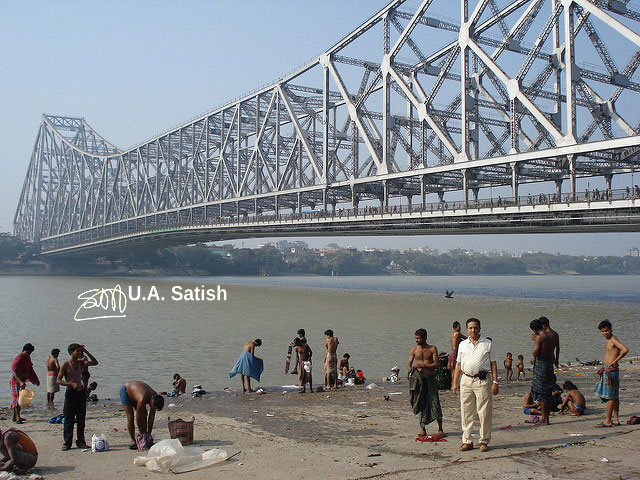 This is the busiest cantilevered bridge in the world. The bridge carries more than 80,000 vehicles every day. It connects Kolkata and Howrah across the River Hooghly. Howrah Bridge was built during World War II and opened to traffic in 1943.

Howrah Bridge is busy throughout the day and night. Vehicles are not permitted to stop on the bridge and photography is prohibited.

Bandra Sea Link is a unique cable stay bridge in the waters of Arabian Sea. It connects Bandra Reclamation with Worli in South Mumbai. It runs for 5.6 km over the Arabian Sea. Travel time is 20-30 min. Motorcycles and pedestrians cannot enter the sealink.

The first four lanes were opened to traffic in June 2009. All eight lanes were opened on 24 March 2010. It took ten years to complete and is an engineering marvel. It cost USD 280 million to build. Daily traffic count on the bridge is 40,000 vehicles.

Kariyankode River flows to the Arabian Sea near Cheruvathur in Northern Kerala. There is an island on the river: Achamthuruthu. I noticed that the buses which ply on the route have eye-catching colours.

Alappuzha has many bridges across its canals. Muppalam or Triple Bridge at Alappuzha literally means three inter-connected bridges. The British built the bridge. It connects three bridges at one place to link three roads. It is 500 metres from the beautiful Alappuzha beach.

Many of the bridges on the canals in Alappuzha and neighbouring Kuttanad have high elevation to allow boats to pass underneath. The bridge shown above features in the Malayalam movie Sound Thoma.

Neriamangalam is at the border of Ernakulam and Idukki districts in Kerala. The  arch bridge of 1935 vintage across Periyar River is a gateway to the high ranges of Idukki.