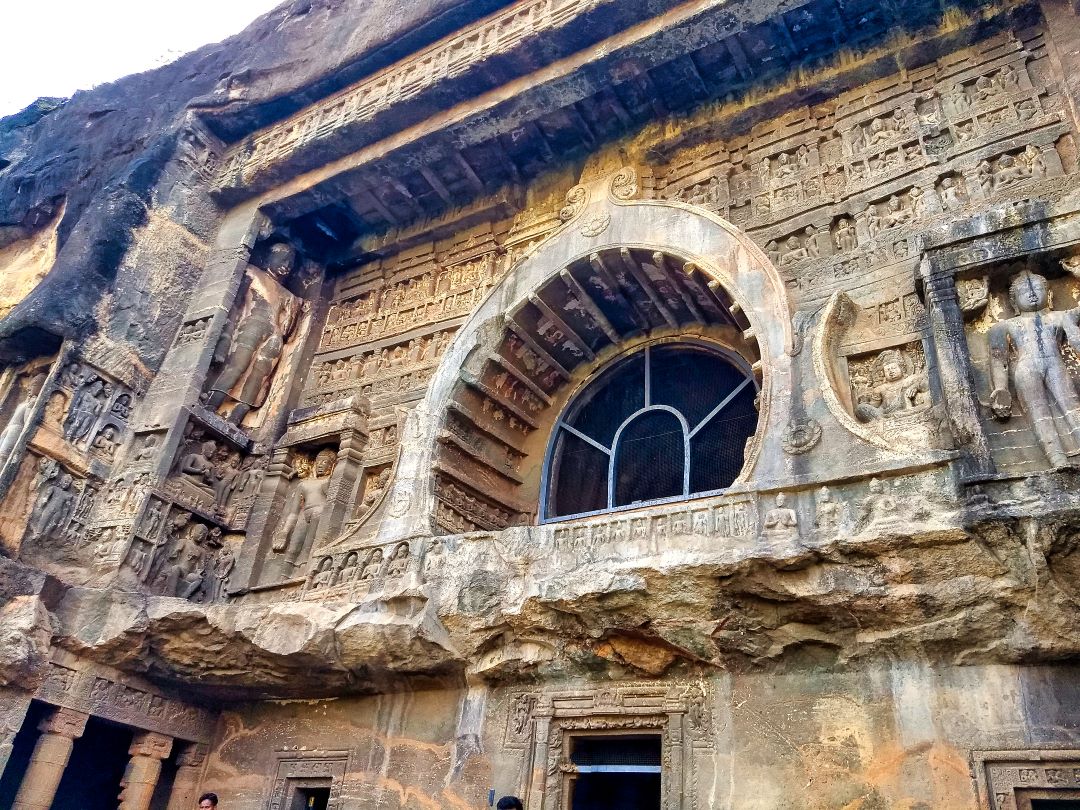 Ajanta Cave 26 is a large chaitya-griha dating to the fifth century. It has a big hall with ribbed ceiling and a stupa at one end. The surrounding walls have fine sculptures.

Construction of Ajanta Cave 26 began in the fifth century. According to experts, the construction happened during the short period between the years 460 and 480 CE. Hindu king Harishena was the principal patron. He was a tremendous supporter of Buddhist architecture, art and culture, After his death, work on the cave gradually came to an end.

Cave 26 has been built on a horse-shoe shaped cliff along river Waghora. Successive volcanic eruptions created the cliff. The basalt rock has horizontal layers. The layers are apparent in some of the sculptures. The artists have used different techniques and tools to work on the rock layers.

At the centre of Cave 26 is a semicircular area with a high hemispherical roof. The roof has rock-cut ribs. Towards the back of the area is the Buddha sculpture. It has a seated Buddha in front. The base has 18 panels and another 18 panels above it. The Buddha has a three-tiered torana and angels hover above him. On the top is a nine-tiered holy harmika. The circumambulatory path around the shrine is elaborately carved.

The wall on the left side near the entrance has a massive Buddha sculpture. Here Buddha is lying on his right side. The sculpture has a length of 7 metres. The panel below the sculpture shows Buddha’s disciples and celestial figures float above. This is one of the grandest and most sensitive depiction in all of Buddhist art. The Mahaparinirvana of the Buddha, when he achieved release from the mortal world, is a deeply impressive sculpture.

Near this sculpture is another larger panel. Mara Vijay is the only sculpture based on Jataka Tales. Here Lord Buddha is seated in Dhyan Mudra under a Bodhi tree. Mara (a demon) is riding his elephant Girimekhala to attack Buddha with his tenfold army. His three daughters Taha, Arati and Raga attempt to dissuade Siddhartha from the path of Buddhism through sensuous moves. The event in this sculpture is part of the enlightenment of Buddha. According to the narrative, there is a dialogue between Buddha and Mara. Buddha has his right hand pointing towards the earth in Bhumispartan Mudra.

The wall on the right is full of  sculptures. The lighting is dim with LED lights. The use of flash is prohibited. Hence photography inside the cave has its challenges.