Taj Mahal is spectacular. The large marble dome on top has two small domes on the flanks. There are two minarets on either side. The openings on the walls are also symmetric.

Taj Mahal is a massive structure. Its height is 73 metres, as tall as the Qutab Minar. The complex of buildings and gardens stands on land of over 22.44 hectares (55.5 acres). The construction has used ivory-white marble, inlaid with semi-precious stones. Mughal Emperor Shah Jahan commissioned the construction in 1632 in memory of his beloved begum, Mumtaz Mahal. Ustad Ahmad Lahauri designed it. Construction of the mausoleum ended in 1643 and rest of the complex took ten years more.

The construction work employed 22,000 craftsmen and artisans from all over central Asia. Over 1,000 elephants transported building materials. The architects made use of jade and crystal from China, turquoise from Tibet, Lapis Lazuli from Afghanistan, sapphire from Sri Lanka and carnelian from Arabia.

The southern end of the complex includes a red sandstone gateway. It has a recessed central arch which touches a height of two-stories.

The garden is laid out as a square which is quartered by long watercourses with walkways, fountains and ornamental trees.

The mausoleum changes colour during course of the day. At noon, it is pearly white. In the evenings, the marble takes on a pinkish hue from the setting sun. On a full moon night, it will look entirely different but I have not had the chance to experience it. Taj Mahal is a photographers’ delight. From whatever angle you shoot, the picture comes out looking good.

The wife of Emperor Shah Jahan (r. 1628-1658), Mumtaz Mahal (aka Mumtaz-i-Mahal), has been commemorated for being the inspiration behind the Taj Mahal and her intense love towards Shah Jehan. She was born in April 1593 in Agra to a noble Persian family. Shah Jahan was charmed by her and they were married in 1612. At first she was known as Arjumand Banu Begum. Shah Jahan decorated her with the title Mumtaz Mahal Begum (Beloved Ornament of the Palace).

She was many times a companion to Shah Jahan on military campaigns. While accompanying the emperor on a military campaign, the pregnant Mumtaz died on June 17, 1631. The Taj in Agra became her mausoleum.

The external decorations here are among the best in Mughal architecture. Calligraphy of Persian poems and abstracts from the Quran can be seen in many places. Decorations make extensive use of plant motifs and abstract forms.

Taj Mahal is a UNESCO World Heritage Site since 1983. It was deemed “the jewel of Muslim art in India and one of the universally admired masterpieces of the world’s heritage”. The site showcases  the best of Mughal architecture in India. It is also one of the seven wonders of the world. It attracts millions of visitors every year.

Environmental pollution became a threat. Air pollution and acid rain discoloured the white marble. The Indian government established the Taj Trapezium Zone (TTZ). It is a 4,000 sq. mile area around the Taj with strict emissions standards. This led to the closure of certain foundries and the blocking of motor vehicles.

On the west bank of the Yamuna in Agra looms Taj Mahal. It is downstream from Agra Fort where the Yamuna makes a sharp turn. Visitors can view Yamuna from the river-front terrace. There are concerns that there is a threat to Taj Mahal due to pollution in the Yamuna. The river merges with the Ganga at Triveni Sangam in Allahabad.

Rabindranath Tagore had said: “The Taj Mahal rises above the banks of the river like a solitary tear suspended on the cheek of time.”

Getting to Agra and Taj Mahal

The fastest morning train from Delhi to Agra is the non-stop 12050 Gatimaan Express. It travels at a top speed of 160km per hour. Travel time is 100 minutes. The train departs Hazrat Nizamuddin Station at 8:10 hrs and arrives in Agra at 9:50 hrs. You can book train tickets online at irctc.co.in. The main railway station in Agra is Agra Cantonment (AGC). Make use of the pre-paid auto or taxi booth at the railway station and continue your trip to Taj Mahal. The return trip of 12049 Gatimaan Express leaves Agra Cantt at 17:45 and reaches H. Nizamuddin  at 19:30 hrs.

The nearest international airport is the IGI Airport in New Delhi. From the airport, Agra is a drive of  227 km (3 hr 27 min).. 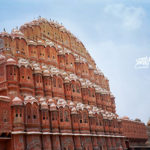