Udupi Sri Krishna Temple  is a major Hindu temple in India. It has its origin in the thirteenth century. The main deity is Lord Balakrishna. The location is in the temple town of Udupi. … 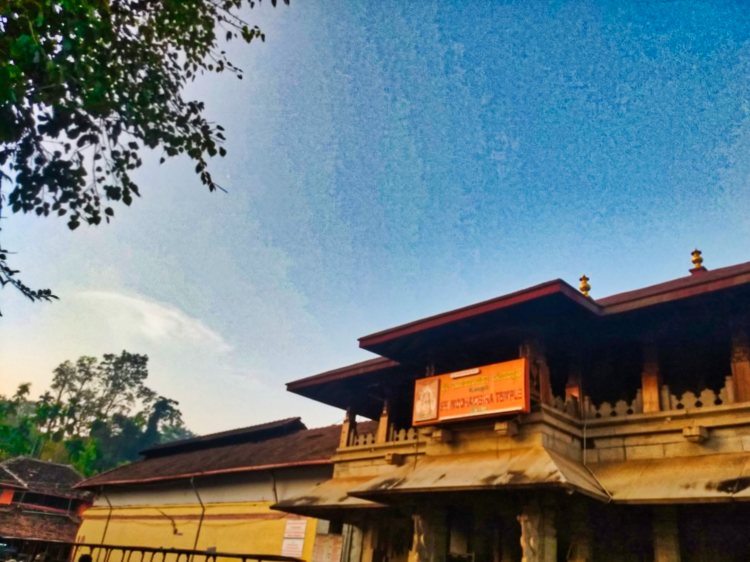 Mookambika temple has a history going back to more than 1,200 years. Mookambika embodies the powers of Parvathy, Saraswathi and Mahalakshmi. She has three eyes and four arms, with the divine chakram and conch in her hands and is seated on a lion.

Dashabhuja Ganapathi is on  the southern side of the sanctum. The Naga Prathistha is on the south-west portion of the pradakshinavattam. There are also separate shrines for Hanuman, Veerabhadreshwarar, Subrahmanya and Shivalingas.

The Saraswathi Mandapam is on the southern side of the outer circle.  Vidyarambham ceremonies are conducted here. This is a Hindu tradition where children are formally introduced to learning. The ritual is ususally  conducted on Vijayadashami day.

Navaratri is the main festival at Mookambika temple. Navratri celebrates the victory of Goddess Durga over Mahishasura, the buffalo-headed demon. She fought for nine days and nine nights before rising victorious on the tenth day.

Navaratri devotes three days each towards worship of the three divine forms of Devi: Durga, Lakshmi and Saraswati. The tenth day is Vijayadashami, the day of victory.

Saraswati Pooja falls on the days of Ashtami, Navami and Vijayadashami. During this period,  students worship books and learning material.  The ninth day is also the day for Ayudha Pooja when you worship the tools of one’s livelihood.

Thousands of children write their first alphabets in front of Mookambikasannidhi in the morning of Vijayadashami. Devotees from all districts of Kerala come to Mookambikasannidhi. Navratri celebrations end with Vijayatra that evening.

The below-mentioned are among the poojas take place every day at Kollur Mookambika Temple.

Sauparnika is a sacred river that originates from the Kudajadri mountains. It flows by the temple. Many believe that the waters of Souparnika river can cure many diseases as it courses through numerous medicinal plants. But the river has become polluted in recent times. Originating from the Kudajadri mountains, the river runs for more than 100km and empties into the Arabian Sea at Kundapura.

The nearest railway station is Mookambika Road. It is 29 km (39 min) from Kollur. An auto ride will set you back by ₹400.  A taxi will cost ₹600. Alternatively, you could hire an auto to Baindur bus station and then board a bus to Kollur. The route winds through dense jungles. At night many wild animals turn up on the road.

The temple town of Udupi is 73km (1h35m) by road from Kollur. It is possible to visit Udupi and Mookambika temples on the same day with careful planning.

Sage Parashuraman, according to beliefs,  created Mookambika temple as it lies in the land between Gokarna and Kanyakumari. The temple finds a place in the 108 Durga temples of ancient Kerala. It is also one among the 108 Shiva temples in Kerala since Lord Shiva has a presence in Mookambika.

Lalbhagh Gardens is a well-liked destination for nature lovers. It covers an area of over 240 acres in the heart of Bangalore and accommodates 1854 plant species. The distance from M.G. Road Metro station is 8 km and from Kempegowda International Airport is 40 km.