A spread of impressive ruins, Roman Forum is in the heart of Rome. This is a small valley between Palatine and Capitoline hills. Many Roman emperors had built their palaces here. The Roman Forum was the scene of public meetings, law courts, and gladiatorial combats in republican times and was lined with shops and open-air markets. It was the hub of political, social and commercial activity of Roman citizens. As you go around Roman Forum, you will see ruins of temples, churches and public buildings.

Dating back to seventh century BC, Roman Forum developed over the years into a centre of socio-economic activities. Roman Forum has seen any number of buildings built, destroyed or demolished, with many Roman styles reflected in these changes. The decline of the Forum occurred around 410 AD with the Fall of Rome, when some of its renowned buildings were destroyed. After the fall of Roman Empire, the Forum waned. Eventually it ended up as a pasture land. Archaeological excavations have revealed the advanced age of Rome.

This is the largest and best conserved of all triumphal arches in Rome. The Senate and Roman people built it in 315 to honour Emperor Constantine on his victory in the Battle of Milvian Bridge in October, 312. The battle took place between the Roman Emperors Constantine I and Maxentius on 28 October 312. Maxentius drowned in the Tiber during the battle. Constantine went on to become the sole ruler of the Roman Empire.

Temple of Antoninus and Faustina 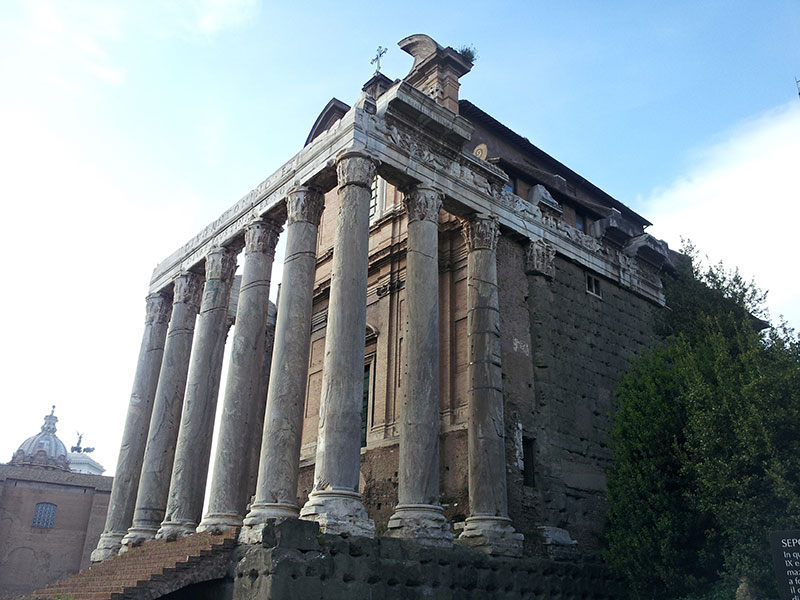 The Roman temple is mostly undamaged. Emperor Antoninus Pius constructed it during his reign and dedicated it to his wife Faustina. In the Middle Ages it was transformed into  a christian church dedicated to Saint Lawrence (Chiesa di San Lorenzo in Miranda). Centuries later it was handed over to the Guild of Roman.

The building stands on a high platform of large grey peperino tufa blocks. The later of two dedicatory inscriptions says, “Divo Antonino et Divae Faustinae Ex S.C.” meaning, “For the divine Antoninus and for the divine Faustina, by decree of the Senate.” 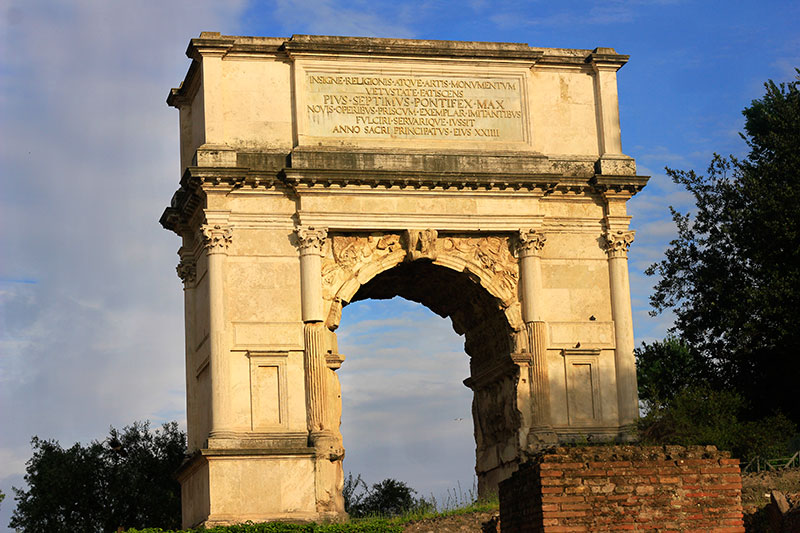 Emperor Domitian erected this first-century victory arch in honour of his brother Titus. The arch is at the entrance to the Forum. Constructed soon after the death of Emperor Titus Flavius Vespasianus in 81 CE, the Arch of Titus commemorates  Emperor Vespasian and his son Titus on their victory in the First Jewish War (66-74 CE).

The Romans destroyed Jerusalem in 70 AC in response to the great Jewish riot known as the First Jewish War which began in 66 AC. The Jews took power in almost the entire country in a four-year insurrection. In retaliation, Roman Emperor Nero ordered the destruction of Jerusalem. 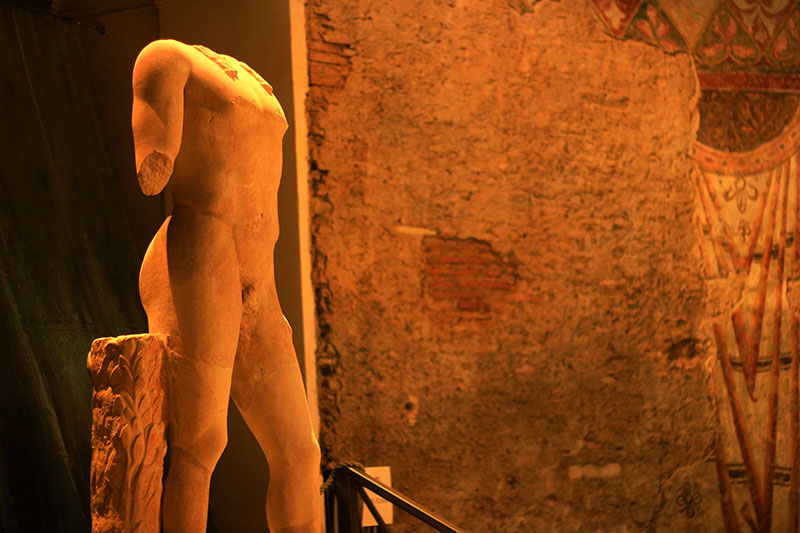 Located in the archaeological area of the Roman Forum, the Temple of Romulus stands between the Temple of Antoninus and Faustina and the Basilica of Maxentius and Constantine.

Other Notable Features of Roman Forum

Temple of Saturn, Arch of Septimius Severus and the Temple of Castor and Pollux are some of the other focus points.

Visitors can buy entry tickets online  or at the ticket office near the entrance. Your ticket allows a single entry to the Colosseum and Palatine Hill as well as Roman Forum. The ticket is valid for two consecutive days which is a helpful feature.