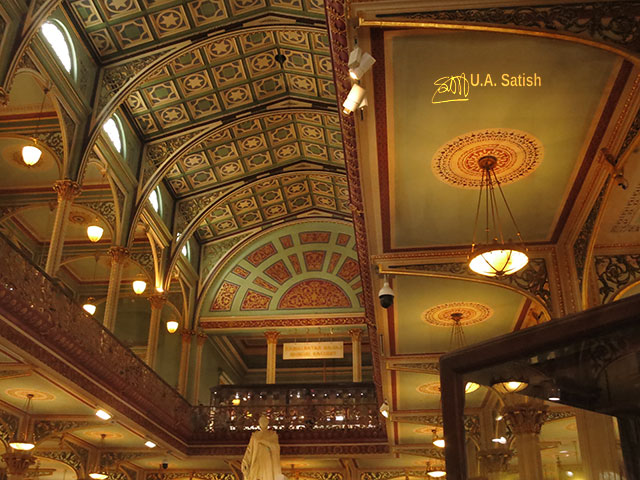 Bhau Daji Lad Museum is in the busy Byculla area of Mumbai. It is next to the botanical gardens and zoo. You can reach it in 3 minutes by walk from Byculla railway station, on the east side. It opened as Victoria and Albert Museum in 1872. It was renamed in 1975 after Dr Bhau Daji Lad who had led its fund-raising campaign. The land was donated by David Sassoon, Jewish businessman and philanthropist. Wealthy Indians such as Sir Jamshedji Jeejeebhoy and Jagannath Shankar Sheth were among the patrons.

The museum building is in European style with high interiors and Victorian pillars. The imported Minton tiles and the beautiful ceiling takes one back to the masterly craftsmanship of nineteenth century. The place was massively restored between 2000-2009. In 2005, the museum overwhelmed Beijing Palace for the coveted award in conservation: UNESCO’s Asia Pacific Heritage Award for Cultural Heritage Conservation.

Ground floor of the museum is dominated by a large marble sculpture of Prince Albert. It was dedicated by David Sassoon. The dedication is inscribed in five languages at the base of the sculpture. The five languages are Marathi, Gujarati, Persian, Hebrew and English.

At the foot of Prince Albert’s sculpture is a beautiful marble bust of David Sassoon. He amassed great wealth in Bombay through cotton trade with China and England. He  built synagogues, gardens, hospitals, schools and colleges.

A metal sculpture of a lion can be seen in front of the museum building.

At the back of the museum is the cafe. It is air conditioned and serves cold drinks and snacks. A TV screen in the corner was showing details of the restoration work carried out at the museum. Adjacent to the cafe are the washrooms and museum shop.

Sir Richard Temple was the Governor of Bombay, 1878 to 1880. When he was leaving India in 1880, it was proposed that a commemorative statue be erected for his 33 years in the Indian Civil Service. The marble statue was created by Thomas Brock in 1884. First location was the Esplanade, Bombay.

Free public tours are conducted on Saturdays and Sundays by a member of the staff: at 11:30 am in English and at 12:30 pm in Hindi/Marathi.

Many of the ancient arts and crafts of India are on display on the ground floor. The museum holds decorative metal ware, bronze sculptures, weapons, fossils and ivory paintings.

Lord Elphinstone was the last Governor of Bombay while the city was still under the East India Company/ He served in this position from 1853 to 1860. He began the project of tearing down walls of the fort.  (Sir Bartle Frere, his successor, later concluded the exercise.) In January 1856, he also started construction of Vihar Water Works.