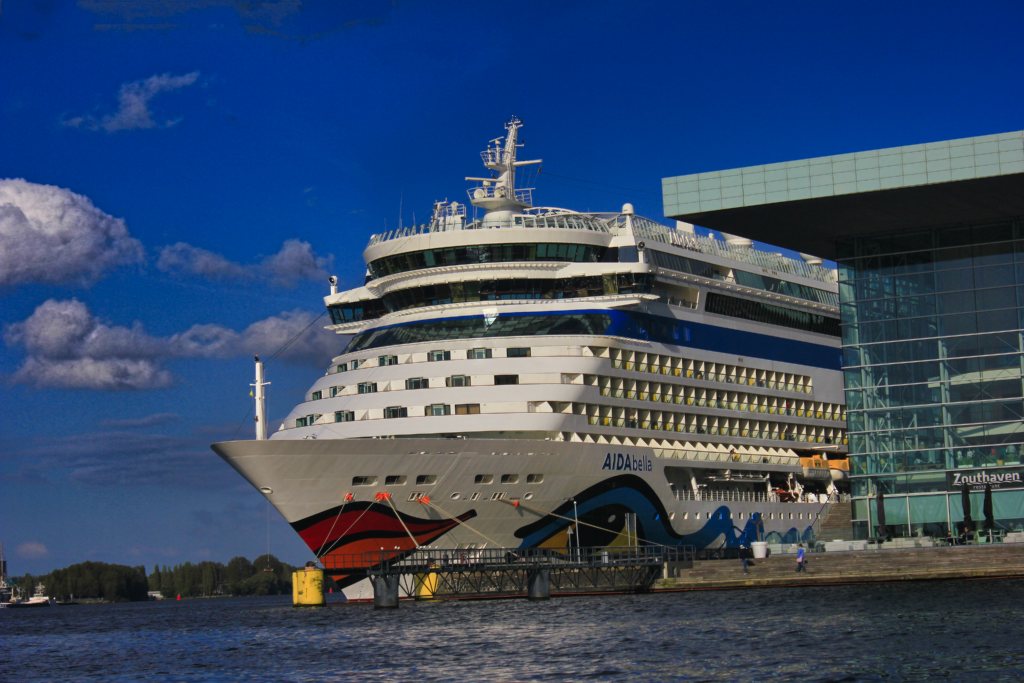 Amsterdam Harbour is a 13th century port on the bank of a former bay known as IJ. It is the second largest port in the Netherlands, after Rotterdam.

The origins of the harbour lie in the 12th century. Fishermen built a bridge and dam across River Amstel. The mouth of the river formed a natural harbour. This is where the Damrak is now. Trading activities developed for carrying merchandise into the countryside.

Immigrants from Germany, France, Spain, Portugal and Scotland streamed to Amsterdam. After a period of decline, things started to look up after establihment of  the Kingdom of Netherlands. in 1815.

Large portions of Netherlands have been reclaimed from the sea. Consequently one-fifth of the country lies below sea level. The North Sea canal connects the harbour to the North Sea and the Amsterdam-Rhine Canal links it to River Rhine.

Up to 180 big cruise ships visit Amsterdam each year. It is a popular stopping point on North Sea, Baltic and Polar cruises . The peak cruise season is April to September.

Cruise ships primarily dock at Passenger Terminal Amsterdam, just east of the Centraal Station in the city centre. You can take tram 26 (one stop) to Centraal Station. Alternatively you can walk to the station in 15 minutes.

Waterland Terminal west of the city has been added as a cruise pier. Shuttles may be offered to Sloterdijk Station which is on the line between Schipol airport and Centraal Station. Both Passenger Terminal Amsterdam and Centraal Station offer luggage storage for those with late flights.

Amsterdam ususally brings to mind the architecture associated with that of medieval and Dutch Golden Age, But the city has more to offer in terms of  modern design. These remarkable buildings stay clear of conventional architectural wisdom. This creates staggering creations that are unsurpassed in Northern Europe.

Boat cruises take visitors around Amsterdam Harbour. Many of these buildings can be seen from the cruise boats. I clicked the photos in the post while travelling on a boat.

Amserdam has around 1,280 bridges on iits canals. And 2,500 houseboats. An interesting way to see the city is to hire a pedal boat which accommodates four.

The Netherlands – Some General Reflections

This site uses Akismet to reduce spam. Learn how your comment data is processed.

Munnar is the most favoured travel destination in

Elllora Cave no. 32 has numerous rock carvings. A

Peralassery temple pond is full of fish. The fish

Odathil Palli is an age-old mosque in the heart of

Cave 12 is a massive monastery on three floors. Th

Munnar is the most favoured travel destination in South India. The cool climate and scenic beauty of Munnar holds a special of attraction to travellers. It is at a height of 6,000 feet. From Kochi International Airport, it is 111 km by road.

Munnar is at the confluence of three rivers: Muthirapuzha, Nallathanni and Kundala rivers. It is the largest panchayat in Kerala.There are many streams and waterfalls in the area.

The British developed Munnar as a hill station. They took the help of a tribal hunter to build a road from Kochi to Munnar. The hunter showed them the route taken by elephants to come down from the Western Ghats. The forests around Munnar support diverse flora and fauna.

Sikkim is the second smallest state in India. The itinerary for one week in Sikkim takes the stress out of your travel planning. The state is home to India’s tallest mountain, Kangchenjunga (8,586 metres). Sikkim shelters alpine meadows, glaciers and many kinds of wild flowers. It has dramatic Himalayan landscapes. You will also find hilltop Buddhist monasteries such as Rumtek which dates from the mid 1700s.

There are no train lines in the state. The nearest railway station (New Jalpaiguri) is in Siliguri, Bengal . It is 120 km (3 hours 45 minutes) from Gangtok. Nearest airport is Bagdogra which is also in Siliguri.

Sikkim’s modern capital is Gangtok. NH 10 connects it to Bagdogra airport and New Jalpaiguri (NJP) station. The road trip takes four hours. Gangtok is on the ridge of a hill, at a height of 5,410 feet. Most of the tour operators in Sikkim have offices in Gangtok. You will have to depend on cars to get around in Sikkim.

One Week in Sikkim - Simplify Your Itinerary - U.A. Satish

Odathil Palli is an age-old mosque in the heart of Thalassery town. The architecture has a distinctive style which is commonly found in mosques in Kerala. Odathil Palli was reportedly built in 1806. Moosakakka Keyi was the man behind construction of the mosque. The palli or mosque is not easily visible from the road as it is behind a gate which has a padippura on top. Padippura is a traditional arched gateway on a path leading to the main building.
The architecture of the mosque shows none of the features of mosques in North India. The reason for this is evident. The workers who built the mosque modelled it on the temples of Kerala.
The building is on three floors. There is a covered veranda running along the sides. The roof, doors and windows are of solid wood. You will not find any nails in the wood.